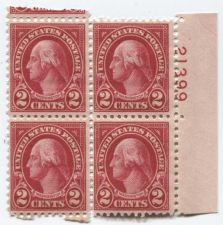 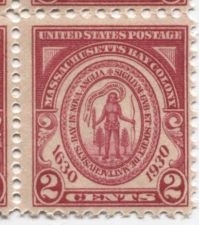 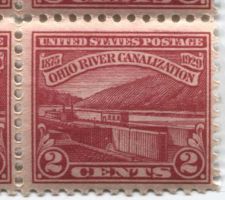 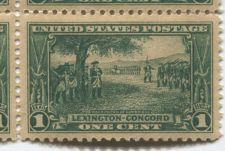 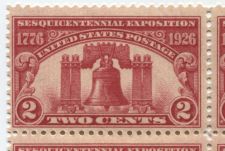 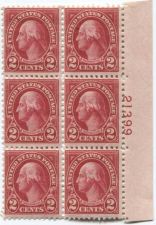 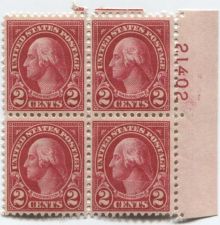 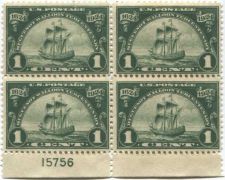 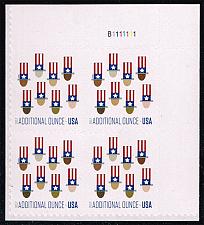 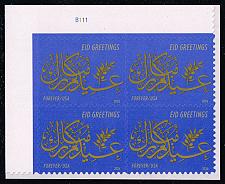 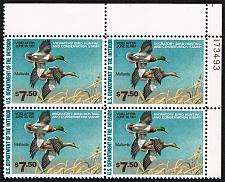 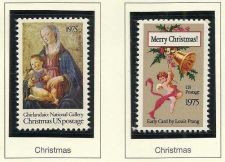 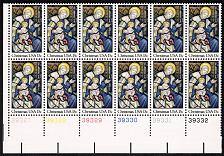 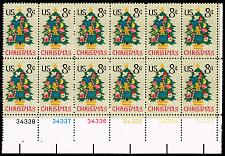 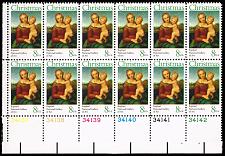 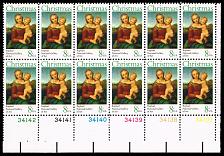 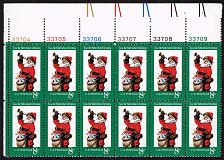 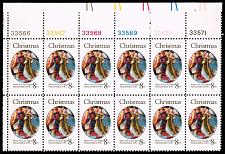 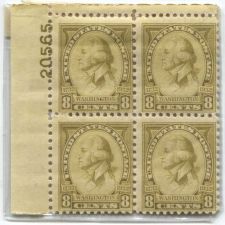 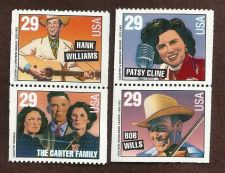 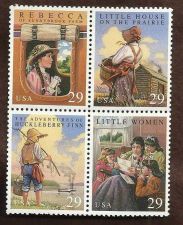 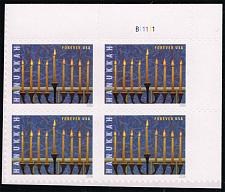 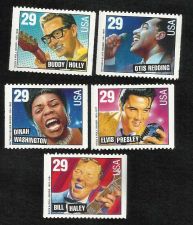 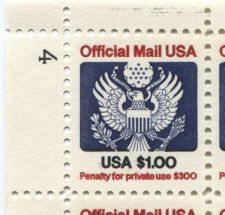 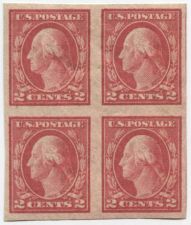 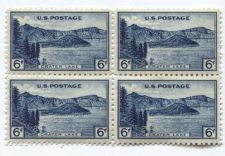 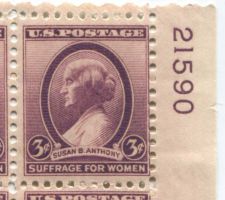 A Plate Block is simply the original sheet of stamps where multiple stamps are still attached to it and the serial numbers for the printing plate that it was printed on, are in the margin or selvage of the sheet. Plate blocks are also known as plate number blocks. Depending on where these were printed, the formatting of the numbers would be different.

Before 1894, the U.S Bureau of Engraving and Printing (BEP) was responsible for printing stamps. After this year, the work was contracted out to other companies such as: Rawdon, Write, Hatch & Edson of New York and also: Toppan Carpenter, Casilear & Co. from Philadelphia. These two companies and others merged and joined together in 1879 and created the American Bank Note Company. This is just a little bit of history of what private companies were doing in the U.S. postage stamp industry.

Rawdon printed the first United States stamps: The Benjamin Franklin 5-cent stamp (Scott #1) and the George Washington 10-cent stamp (Scott #2). These were printed starting in 1847 and did not have plate block numbers on them through 1851. Toppan also printed stamps from 1851 through 1861. They began using a system of numbering the first plate that was used on each printing of the stamps for each denomination, which would be numbered "1" for one denomination, "2" for the second one and son on.

From 1861 through 1872, the National Bank Note Company picked up the printing job, but the plates would be numbered sequentially - and would be independent of what denomination was used. Their multi-colored Pictorial stamps (1869-1870) and Bank Notes (1870-1871) also started getting a plate count by this same company. The Pictorial stamp had 2 colors, but the same numbers were being used for each color plate. Later on, each color plate had different numbers.

Starting in 1883, letters were added to the plate in addition to the numbers, by the American Bank Note Company. Starting in 1901, BEP began putting different numbers on their plates for each color that was used. For example, the Pan American issues had this and they were given a number not only for the stamp's frame, but also for the vignette.

After 1980, the prefixes that were on plate numbers were used to identify the private printers that were being contracted for the printing of US stamps and blocks. For instance "A" would be printed to denote that American Bank Note Company was responsible for the print. "V" would stand for Avery Dennison, "G" would stand for Guilford Gravure and so on.

The process was a little different in the World War II era though. The Overrun Countries Series (which commemorated the 13 countries that were overrun by the Axis powers) - These were printed by the American Bank Note Company in 1943, except for Korea in 1944. Instead of plate block numbers, these stamps included a full color engraving of the flag for each of the countries on the stamps.