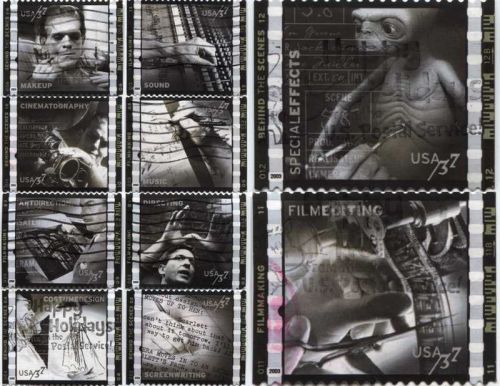 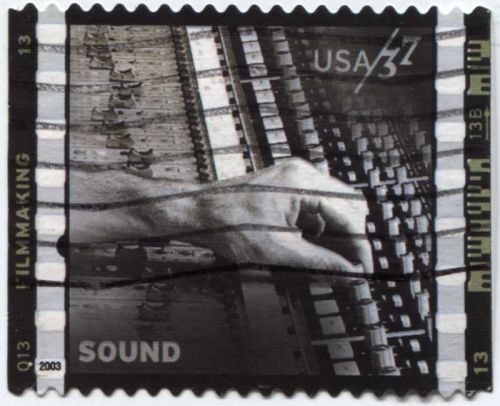 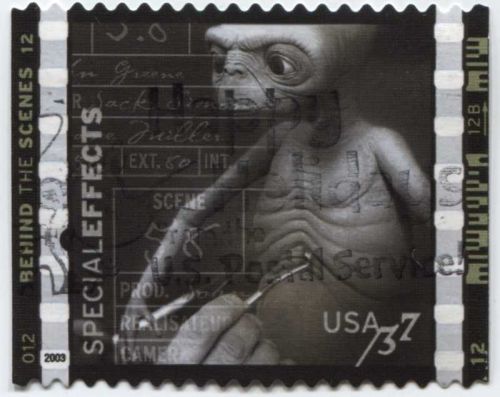 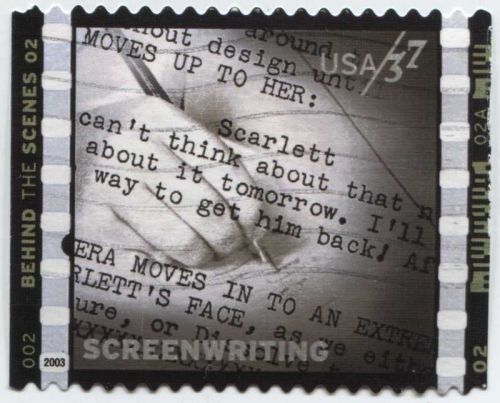 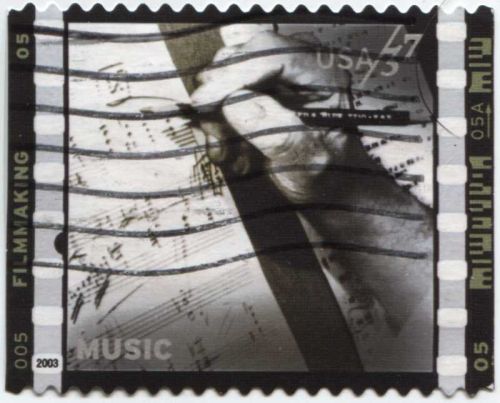 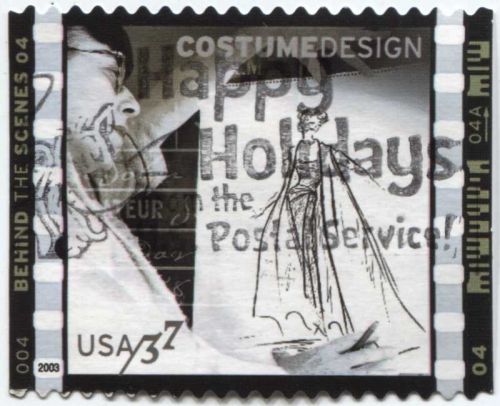 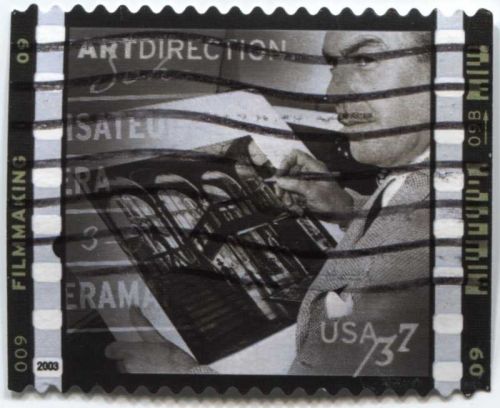 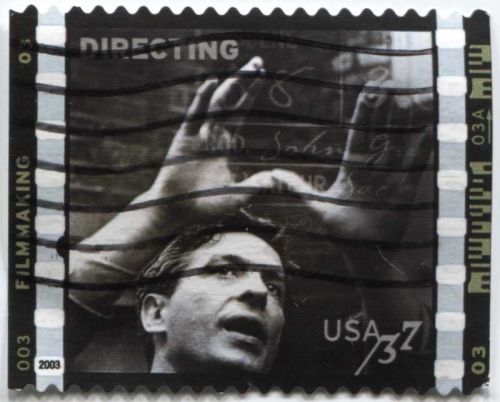 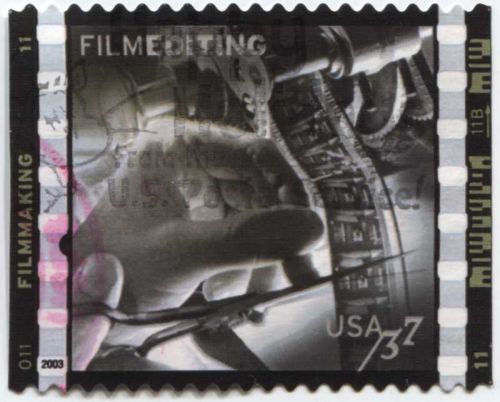 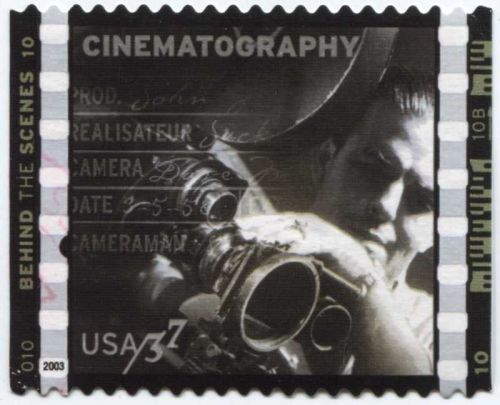 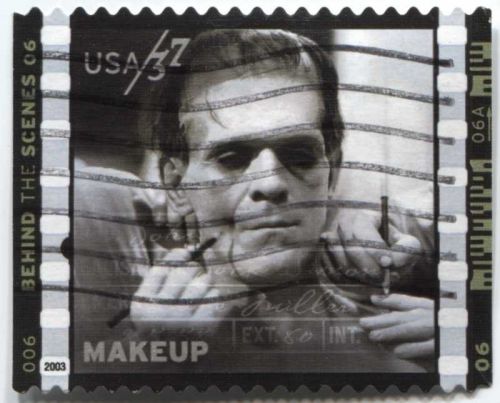 Very neat set of modern stamps, shows various aspects of Modern Film Production...includes all 10 stamps shown...of course they are not to scale...all are the same size.

U.S. #3772
37¢ American Filmmaking
Set of 10 Stamps
Issue Date: February 25, 2003
City: Beverly Hills, CA
Quantity: 7,000,000
Printed By: American Packaging Corp. for Sennett Security Products
Printing Method: Photogravure
Perforations: Serpentine Die Cut 11 horizontally
Color: Multicolored
Behind-the-scenes talents and skills that combine to make a motion picture successful are spotlighted on this souvenir sheet. The stamps were issued to commemorate the 75th anniversary of the founding of the Academy of Motion Picture Arts and Sciences in 1927. The Academy is most famous for its annual awards of merit.
The role of producer, exemplified by Cecil B. DeMille, is honored on the selvage. He is shown on the set of his 1934 epic, Cleopatra. Explanatory text about each of the other filmmaking crafts appears on the back of the stamps.
Screenwriting: This stamp shows a page from the script for Gone With the Wind, a 1939 MGM film adapted from the novel of that name written by Margaret Mitchell.
Directing: Director John Cassavetes is shown on this stamp, using his hands to frame a shot during filming of his 1970 film Husbands.
Costume Design: Edith Head won eight Academy Awards for costume design. On this stamp she holds a sketch of a dress designed for actress Janet Leigh.
Music: Max Steiner created the musical scores for King Kong, Gone With the Wind, and A Star Is Born. His hand appears on the Music stamp, making musical notations.
Makeup: Boris Karloff sits patiently on the Makeup stamp, while makeup artist Jack Pierce works his magic. The transformed actor played the monster in the 1931 Universal Studios film, Frankenstein.
Art Direction: Perry Ferguson is seen on this stamp working on a set design for the 1940 RKO film classic, Citizen Kane.
Cinematography: An assistant cameraman, Paul Hill, is shown adjusting a camera during the filming of a 1933 Universal Studios production, Nagana.
Film Editing: The Film Editing stamp shows the hands of editor J. Watson Webb cutting film for The Razor’s Edge, a 1946 Twentieth Century Fox motion picture. The film was based on a novel by W. Somerset Maugham.
Special Effects: On this stamp, Mark Siegel sculpts a small model of the alien for Universal Studios’ popular E.T. The Extra-Terrestrial.
Sound: Gary Summers, of Skywalker Sound, operates a control panel on the Sound stamp. The re-recording mixer works to combine sound effects, dialog, and music. 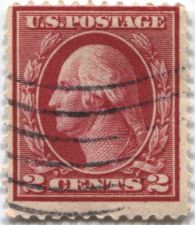 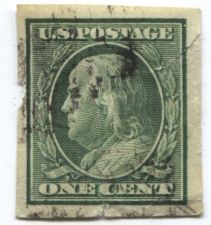 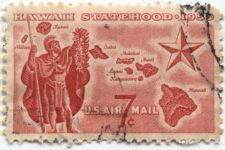 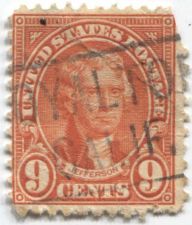 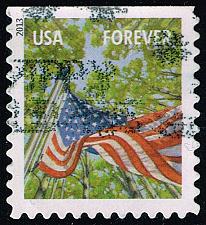 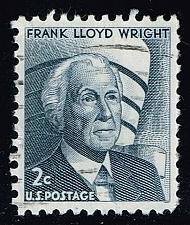 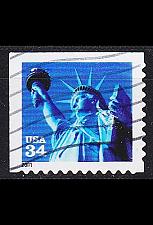