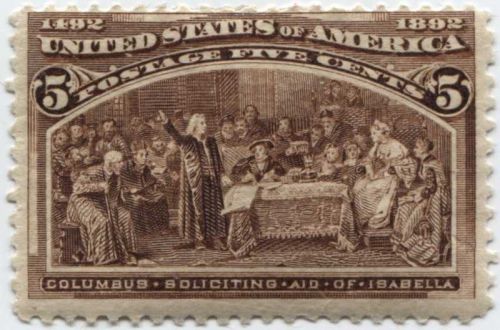 Very nice old and rare stamp from the Columbian Exposition, this 1c Stamp isn't the rarest, but getting hard to find.  Catalog Value $125.00!

Issue Date: January 1, 1893
Issue Quantity: 35,248,250
Printed by: American Bank Note Company
Method: Flat plate
Watermark: None
Perforation: 12
Color: Chocolate
This stamp shows Columbus before the queen – seeking support for his grand plans to sail across the Atlantic Ocean. The king and queen did eventually support him. However, they first had Columbus investigated by a special committee, and this investigation delayed his maiden voyage for four years!
Printed by the American Bank Note Company
The 1893 Columbian Series was printed by the American Bank Note Company. The engraving was done by Alfred Jones and Charles Skinner. The stamps were printed in black ink in sheets of 100 subjects on soft porous white wove paper and perforated 12.
About the Columbian Series
The Columbian Series is a milestone in American history. Its impact on stamp collecting was so great that the series’ degree of completion is often the “yardstick by which a U.S. collection is measured” (Max Johl, 1947).
The series was issued in advance of Chicago’s 1893 World Columbian Exposition, an international fair celebrating the 400th anniversary of Christopher Columbus’ 1492 arrival in the New World. The series was used to advertise the event – the first time postage stamps were used to promote a commercial event.
The 1893 Columbian Exposition stamp series was like nothing before it. The Columbians were the first U.S. commemorative stamps, and they created a worldwide phenomenon. Expertly engraved and generous in size, the Columbians are among the most sought-after of all U.S. stamps.
An Instant Hit with Collectors
At the time they were issued, the Columbian stamps were controversial. Collectors eagerly awaited the series, forming long lines to purchase the stamps. Yet many were frustrated by the price of owning the complete series, which equaled more than $2,030 in today’s unskilled labor wages. Some postal clerks refused to sell Columbian stamps because demand far exceeded supply.
As a consequence, used Columbian stamps were selling for almost full face value in 1893 – even as mint stamps were officially on sale. The craze for Columbian stamps was even more pronounced in Europe, where collectors hounded American tourists and begged for stamps from their mail. A corner of Hamburg’s stock exchange was devoted to trafficking Columbian stamps. On August 11, 1893, the New York Times reported these transactions were conducted “as carefully as they handled the highest gilt-edged securities.” 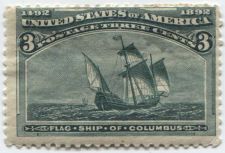 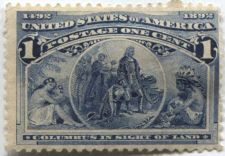 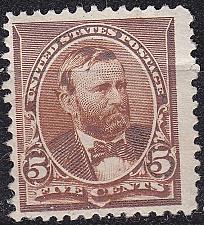 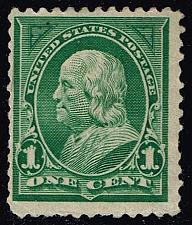 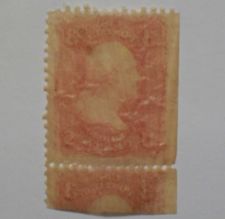 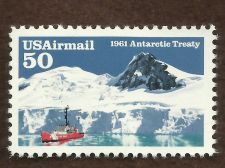 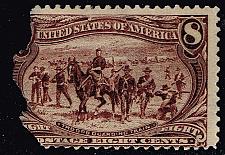